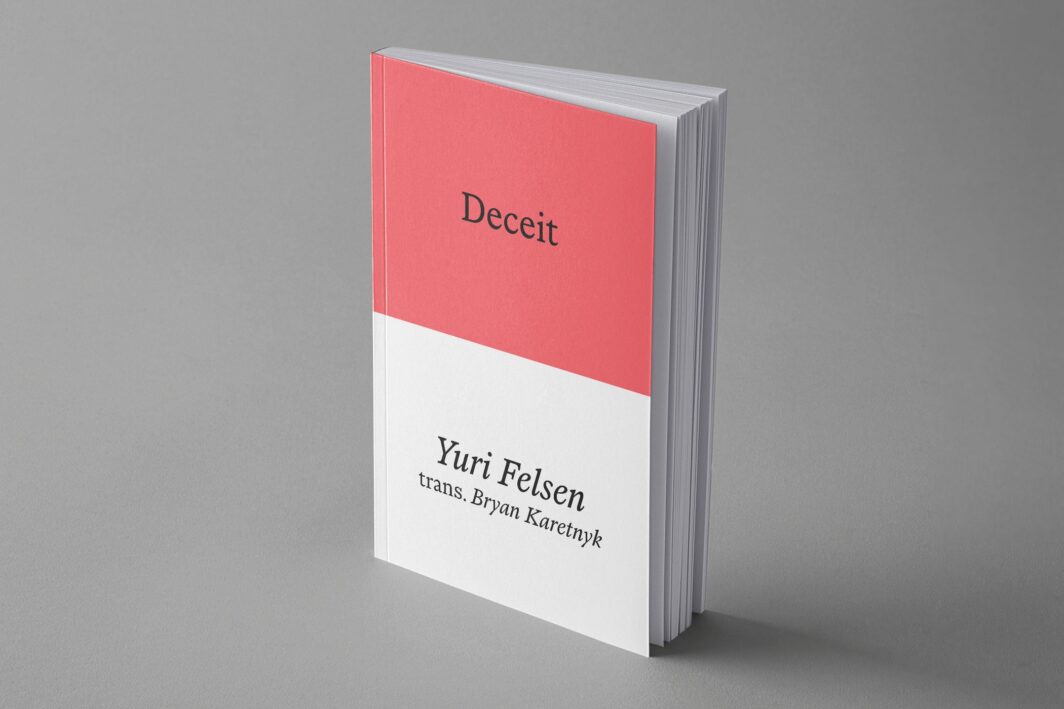 WE ARE EXTREMELY SORRY TO ANNOUNCE THAT DUE TO THE RAIL STRIKES, AND A CASE OF COVID AMONG OUR PARTICIPANTS, THIS EVENT IS POSTPONED. WE WILL UPDATE THIS PAGE WITH FURTHER DETAILS AS SOON AS WE HAVE A NEW DATE CONFIRMED.

The Pushkin House Bookshop and Prototype Publishing present the launch of Deceit, the lost debut novel by Russian émigré author Yuri Felsen, published for the first time in English. A panel of very special guests will gather to explore Felsen’s ground-breaking debut novel and the life of this exceptional modernist author which was tragically cut short.

Our panellists are translator, editor and regular contributor to the Times Literary Supplement Bryan Karentnyk, prize-winning novelist Alex Pheby and journalist, broadcaster and the Fiction and Politics Editor of the Times Literary Supplement Toby Lichtig. Together they will explore the themes behind Felsen’s writing — the search for love and meaning in a world dominated by totalitarianism, and what it means to be in exile — while exploring the wider context of the émigré movement, and its literary world.

A modernist author known to his contemporaries as ‘the Russian Proust’, Felsen was part of a thriving network of Russian writers in Paris in the 1920s and ‘30s. He was even praised by Nabokov, who said of his writing ‘This is…real literature, pure and honest’. This is the first English translation of Felsen’s landmark modernist debut, and the first time that any of his full works have been translated into any language other than Russian.

Originally published in Russian in 1930, Deceit is the first major work by Yuri Felsen. Felsen was a significant writer of the 20th century Russian diaspora who died in the gas chambers in Auschwitz in 1943, and whose legacy and archive was destroyed by the Nazis.

Set in interwar Paris and taking the form of a diary, the novel relates the complex and fraught relationship between an unnamed narrator and his love interest and sometime muse, the beguiling Lyolya Heard. Subtle and profound in its exploration of love, deceit and betrayal, Felsen’s novel is a daring and highly original work of psychological fiction. Quite unlike any other writer in the Russian canon, Felsen evokes in rich, poetic, idiosyncratic prose not only the Zeitgeist of interwar Europe and his émigré milieu, but also its psychology and the existential crisis of the age. What Nabokov achieves with images and the physical world, Felsen does with the emotional and metaphysical.

This event is organised as part of Pushkin Book Weeks – a series of events dedicated to Russian culture and its translation as well as to wider literary and cultural debate and learning.

Bryan Karetnyk is an award-winning British writer, critic and translator. His recent translations from the Russian include major works by Gaito Gazdanov, Irina Odoevtseva, Boris Poplavsky and Yuri Felsen. He is the editor and principal translator of the landmark Penguin Classics anthology Russian Émigré Short Stories from Bunin to Yanovsky and is a regular contributor to the Times Literary Supplement and the Financial Times.

Alex Pheby lives with his wife and two children in Scotland, and teaches at the University of Newcastle. Alex’s second novel, Playthings, was shortlisted for the 2016 Wellcome Book Prize. His third novel, Lucia, was joint winner of the 2019 Republic of Consciousness Prize.

Toby Lichtig is the Fiction and Politics Editor of the Times Literary Supplement. He is also a freelance editor, writer and broadcaster, and this year’s chair of judges for the EBRD Literature Prize. Twitter: @TobyLichtig.